Dr. George E. Stocking peacefully passed away Friday, August 10, 2018 at the
VA Hospital in Miami, FL following an illness. Born to William Edward Stocking
and Laurel Bell Prattsman Stocking on August 21, 1931, he grew up in Miami,
FL across from the Orange Bowl. He graduated from Miami High and attended the
University of Miami for his Associates Degree.
Following graduation from college, George Stocking entered the Air Force and
completed flight school. After brief duty as a fighter pilot, he served as
a flying instructor.
While serving in that capacity, he was injured in an aircraft crash in May
1956. In addition to other disabilities as a result of burns received in the
crash, he was left totally blind. Following treatment at the Military Burn
Center in Texas and Blind Rehab at Hines, he returned to Florida for plastic
surgery.
The training he received and the independence he gained at Hines made it
possible for him to complete ten years of reconstructive plastic surgery, where
he underwent over 100 operations. Near the end of his recovery, and through
the encouragement of his fellow blinded veterans, he gained the confidence
to pursue a vocational rehab program in the Psychology Service at the
Veterans Administration (VA) Hospital. As a result of that training, he decided to
return to college. He earned his Master of Science in Counseling degree,
completing his Doctorate in Education in 1970 from the University of Miami.
Dr. Stocking worked for more than 40 years as a Rehabilitation Psychologist
for the VA Hospital, until he retired in May 2008 with 2,680 hours of unused
sick leave time. Nevertheless, he continued to work part-time for the VA for
several more years as a volunteer.
Dr. Stocking received a number of professional awards on the local, state,
and national levels throughout his career. In 1997, he received the Appreciation
Award for his many years of service on the Statewide Advisory Council,
Florida Division of Blind Services. In 1991, he received the Professional Service
Award from the Chiefs of VA Psychology at the American Psychological
Association Convention. In 2001, he was given the Dr. Mark Walcott Award for Excellence in Clinical Practice for his work in rehabilitating veterans.
When his frequency of surgery diminished in the 1960s, Dr. Stocking became
active in the Florida Regional Group (FRG) Blinded Veterans Association
(BVA).
His first assignment was, as FRG Legislative Committee Chairman, on the
Homestead Tax Exemption Project. After six years of work, the Florida Legislature
extended this Exemption to 100% service connected blinded veterans. Dr.
Stocking continued working with other disability organizations and four years later,
the Total Homestead Tax Exemption was extended to all 100% service connected
veterans and through another statute, with an income restriction, to all residents
of Florida (who are restricted to a wheelchair for mobility or who are
legally blind). Through subsequent work with the Legislature, this income restriction,
on the latter statute, was increased and an automatic Cost of Living
Adjustment added.
Since then, Dr. Stocking held various positions with the FRG BVA including:
President, Vice President, and for decades, until his passing,
Secretary-Treasurer.
Dr. Stocking was the editor of the FRG Newsletter, which is published 10
times per year and provides information to over two thousand blinded veterans
and their families in large print and recorded versions.
In addition to his work in Florida, Dr. Stocking has been active in his
district and nationally for the BVA, serving as District 5 Director for 33 consecutive
years beginning in 1981, and five additional years in the 1970s, President
(1979-81) and Vice President (1977-79). For many years, he served on the Executive
Committee and the BVA National Legislative Committee, often as its Chairman.
During that time, with the cooperation of other blinded veterans and the BVA
Headquarters staff, he has contributed to planning the BVA Legislative
Program based on the resolutions passed by the membership at the National
Conventions.
As a result, significant legislation has been passed by Congress for the
benefit of blinded veterans and their families. In the 2014 National BVA Bulletin,
he was highlighted as the longest serving member on the Board of Directors
in BVA history.
Dr. Stocking has received two National Awards presented by the BVA: The
Major General Melvin J. Maas Achievement Award for his personal vocational achievement in 1969, and The Irving Diener Award in recognition of his work for the BVA in 1977.
Dr. Stocking is a Past President of the Miami Lighthouse for the Blind and
the Florida Rehabilitation Association's Dade Chapter. He has served on the
Advisory Council of the Florida Division of Blind Services, the Florida
Council on Independent Living, and the Advisory Committee of the WLRN Radio
Reading Service.
His hobbies included enjoying mystery novels via talking books, and he was a
faithful Miami Hurricanes and Dolphins fan. He enjoyed traveling and reminisced
often on his favorite childhood comic-Smilin' Jack.
Dr. George Stocking is survived by his wife Cathie Cotton Stocking, his
daughters Debra Stocking, Diane Stocking Neiss and her husband Todd Neiss, and
Donna Stocking Cohrs, his step-son John Cotton, his grandchildren: Douglass
Cohrs, Katie Cohrs and her partner Jason McInnis, George Paschall, Boomer Paschall,
Curtis Paschall, and Christie DeBoer, his great-grandchildren: Evelyn
McInnis, Curtis Paschall and Jaeden Paschall. He is pre-deceased by his brother William
Stocking.
Visitation ceremony will be held on Monday, August 20th, 2018 at McWhite's
Funeral Home North, 1215 N. Tamarind Ave, West Palm Beach, FL 33401 from 1 pm
to 2 pm, followed by a grave-side Military Burial at the South Florida
National Cemetery. Donations in lieu of flowers can be sent to the Blinded Veterans
Association Florida Regional Group's Scholarship Program, 3801 Coco Grove
Ave, Miami, FL 33133. 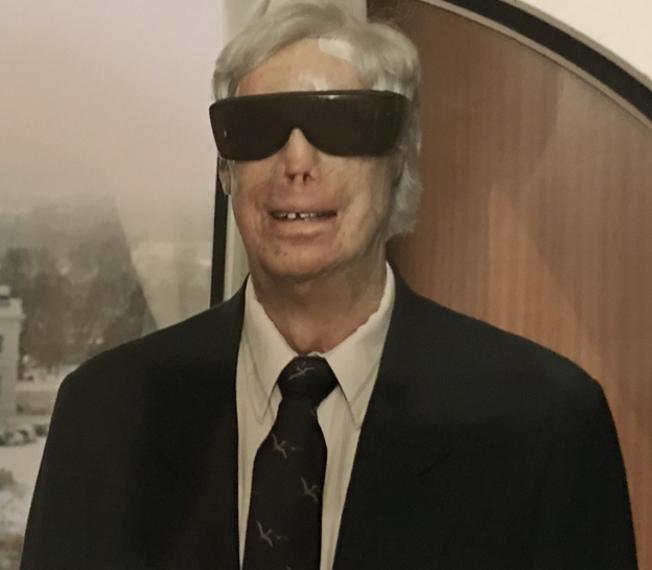